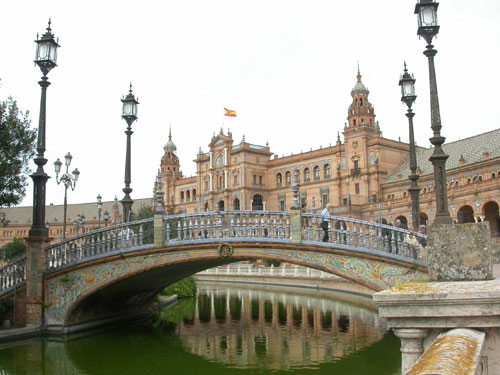 Century I SAW C. The Phoenicians introduce the worship to Hercules, mythical founder of the city.

206 a.C. Foundation of Italics by Scipio the African.

45 a.C. Seville is become city for July Caesar, al to conclude the battle of Munda.

409 Plunder of the city by the Vandals.

531 Phase of cultural splendor after the Visigoth invasion.

711 The Islam arrives at Seville.

844 The vikingos arrive for the river to the city, plundering it and burning the old Greater mosque, today Parish of El Salvador.

900 Isbilia enters to form part of the from cordoba Caliphate.

1031 Isbilia becomes a kingdom of Taifas al to be disintegrated the from cordoba Caliphate.

1071 Under the reign of Al-Mutamid, Isbilia becomes the kingdom of Taifas more desarollado of the peninsula.

1091 Al-Mutamid is ousted for the AlmorÃ¡vides and they are done with the power.

1171 Begins the construction of the New Greater Mosque and of its great alminar, today tower of the weather Vane, by order of AbÃº

1248 The city is conquered by Fernando III the Saint. They are expelled the Moslems and themselves repuebla with Castile arrival

people. With them the Mudejars they live together and the Jews.

1391 The archdeacon of Ecija incites to the people to the first killing of Jews in Spain.

1400 Placement in La Giralda of the first public clock of Spain.

1477 Foundation of the first press in Seville.

1481 It is installed in Seville the first court of the Holy Investigation.

1493 Columbus enters the city of return of its first trip.

1503 It begins the Age of Gold in Seville al to monopolize the commerce with the Indies.

1519 Magellan initiates its expedition that will give the first return al world since the port of Seville.

1526 In the Fortress of Seville the real wedding of Carlos is celebrated I and Isabel of Portugal.

1599 It is born in Seville the largest painter of the 17th century, Diego de Silva VelÃ¡zquez.

1602 Cervantes begins the writing of The Quijote while is found prisoner in the carcel Real Sevillian.

1610 Expulsion of the Moors of Andalusia.

1649 The population of the city is reduced halfway by an epidemic of plague.

1680 It begins the commercial sunset of Seville, owed al transfer of the fleet from Indies to Cadiz.

1728 They begin the works of the Factory of Tobaccos.

1755 Great part of the city is destroyed for the earthquake “of Lisbon”.

1758 The first public coffee of Seville is inaugurated.

1808 The Central Meeting is established in Seville, fleeing the French.

1810 The French occupy the city plunder great part of the artistic patrimony.

1812 It is proclaimed the Liberal Constitution and the French are expelled of Seville.

1817 The steamboats enter for the first time in the port of Seville with the ship Betis.

1825 Paving of the streets of the city, under the mandate of the assistant one Arjona.

1831 The School of Bullfighting is founded.

1837 The DesamortizaciÃ³n of MendizÃ¡bal carries to the ruin to numerous convents and Sevillian temples.

1839 The Factory of Ceramics is founded of Pickman in the building disentailed of Santa MarÃ­a de las Cuevas.

1855 The Station of train of Cordoba is inaugurated.

1877 It is make public in Seville the wedding of the king Alfonso XII with MarÃ­a de las Mercedes.

1929 La ExposiciÃ³n Iberoamericana is inaugurated that transforms the city.

1987 They begin the land movements works of the Island of the Monastery for the ExposiciÃ³n Universal of 1992.

1991 Inauguration of the Teatro de la Maestranza and of the Just Saint train Station.

1995 Wedding of the infant Elena and Jaime of Marichalar, celebrated in the cathedral March 18.