Nature and History, Harmony and Progress 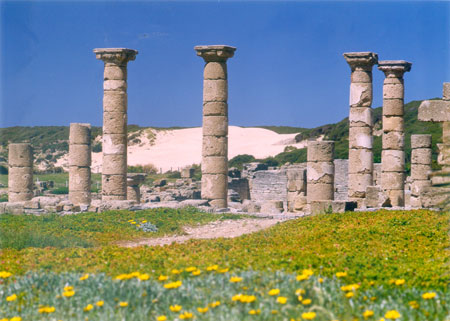 In planning a trip of this kind, the first concept that must be remembered is “planning”. How to combine sea and mountain paradise and closeness, nature and history, progress and harmony?
One of the few places where we can travel in search of a balanced fusion of coast and mountains, forests and desert wildlife, ruins of historical value, relaxation and good weather, food and entertainment, 1 st; lies on the Atlantic coast of Cadiz , Specifically in a small town in the Natural Park of the Strait called Bologna.
In the vicinity of Bologna are the first ruins of Baelo Claudia, which carry us at the end of the second century BC, when it is recognized as one of the most important cities of the so-called Betica Romana, thanks mainly to trade. In it we find the wall, a public square or forum, the Capitol, the courthouse, the Senate and the market, in addition to the hot springs of the city, aqueducts and the magnificent Teatro at its highest zone.
These ancient ruins appear to have already spent part of their natural environment, as a whim rocky, the thresholds of paradisiacal beaches of Cadiz, and at the foot of mountains that rise like giant lookout towers that arropa Mediterranean forest landscape. The beach Bologna melts before our eyes with immense dunes, which are erected on the natural park of trees about 30 meters high. The cliffs cut the coastline hiding small and cozy coves. And even contains an area with mud clay to give you a bath, for some medicinal, aphrodisiac for others. A whole experience.
Due to its geographical location, there is quite a landscape transformed, but a couple of dozen cottages white facades of the purest traditional style, where we can find to break our hostel or a hotel, hostel or houses for rent; inns, restaurants Typical, “Baret” and bars. And for the amantesde mattresses and low budget, there are several campgrounds within a 5 km radius.
We can complete our trip by visiting villages and nearby places, including Zahara, Punta Paloma, Barbate, Los CaÃ±os of Mecca, El Palmar de Troya, Conil, Atlanterra, Tarifa, etc.., With a wide range of tourist attractions and areas of similar beauty to Bologna.