HISTORY AND LANDSCAPE
Alameda is located in the Antequera region, in the northern area of the province and at the foot of the Sierra de la Camorra. It opens up onto a plane, speckled with small rises, and on the whole, covered with olive groves. It is the frontier between the Antequera depression and the Cordoba and Seville countryside, towards which the municipal boundaries merge, through the numerous river beds and ravines which pour into the Genil river..
On the southern border, apart from the previously mentioned highland, there is the Ratosa lagoon, which although dry most of the year, is protected by the Junta de Andalucia.
The human settlements are very old, according to the findings belonging to the Iberian era; nevertheless, the most numerous traces of population come from the Roman era. The city of Astigi Vetus used to exist in this period, judging from an inscription which appeared in this town. The most important archaeological findings belong to this town.
In more recent times, the town belonged to the Marquis of Estepa, at that time forming part of the province of Seville. One of the most remembered events being the death of the bandit JosÃ© MarÃ­a Hinojosa, El Tempranillo (the early one), who was killed by an old raid companion near the village in 1833, according to his tomb stone. His tomb in the village church is frequently visited by tourists.

PLACES TO VISIT
As in other towns in the region of Antequera, the only monument is the parish church “la Inmaculada”, built in the 18th Century by the Marquis of Estepa. The most interesting parts of its architecture are the three cubicles situated at the head and each side of the transept, and the exhuberant decoration. In the square, in the town centre, there is a many spouted fountain. 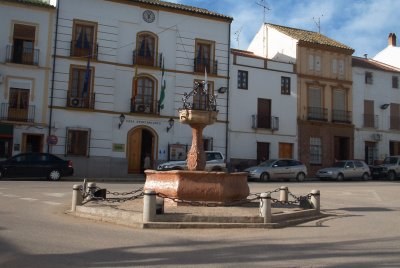 SHOPPING
The handicraft is based on esparto grass products and also rustic and wooden furniture, especially seats.

GASTRONOMY
To eat, and eat well, becomes a cult to the gastronomic richness based on quality, variety, and the use of natural products from the earth and sea, in any of the villages of the region of Antequera. They have a variety of Antequera ‘porra’, ‘migas’ which are breadcrumbs fried with garlic, ‘sopaipas’ and ‘tapas’ which are snacks..

FESTIVITIES AND TRADITIONS
The Candlemas is on the 2nd February. On the 15th May, San Isidro, the patron saint is celebrated. In these festivities, the people participate in the pilgrimage with decorated carts which are later destroyed. This festivity is celebrated in August.

ART AND CULTURE
Like other peoples of the region Antequerana only exists as a monument the parish church of the Immaculate Conception, built in the eighteenth century by the Marquis of Steppe. The most interesting architecture dieciochesca are three rooms located at the ends of the header and cruise plant poliobulada and exuberant decoration. In the urban center is the plaza with a fountain of various pipes.
Alameda also has the Museum of Ancient Aperos. This particular museum is owned and was founded by D. Antonio Cortes, a former mayor of the village.
Inaugurated in 1998, brought with the sole desire to preserve the traditional heritage, as has been the farm implements and other items specific to the farming or ranching. In addition, within their rooms can observe a variety of crafts people, as well as various photographs related to the famed bandolero Jose Maria Hinojosa “Tempranillo”. Access to the museum is via the housing owner of the museum, which cater especially to visitors in small groups.
Their doors are open to the public daily, but not stick to a strict schedule of visits.
Admission is free, but not to receive any aid from the government, it is advisable to make a voluntary contribution.