Located in the SerranÃ­a de Ronda, between the Sierra de CaÃ±ete and Sierra Zorrito. Almargen identifies with the people of the plains that have their main livelihood in agriculture, in a landscape of olive groves, fields of grain and sunflower. There are many archaeological sites that confirm the existence of settlements from the Copper Age, perduraciones during the Bronze, ibero-romanos and Islamic.

The heart of the village is its main square, where there is a source, and is very close the church of the Immaculate Conception (c.XVI). They are sights medicinally, the wellspring of Casablanca and the caves of St. Peter and Casablanca. The saw Almargen and Salt River site are suitable for the practice of walking and cycling. They can see archaeological remains extraordinarily valuable, as a kind of idol concealed phallic, a stele engraved in the Bronze Age or a copy of the first spades of Prehistory.

They are highly valued craft work based on forged and the forge. The gastronomy Almargen is determined by the products they grow in meadows. The asparagus soup is a delicious example of this and that you can taste in restaurants in the area. 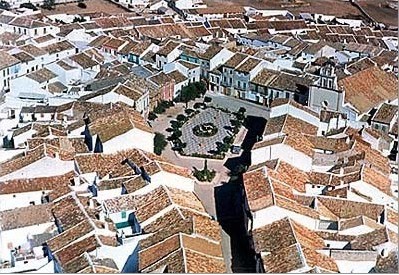 STORY
Although we know of the presence of man in the land of the municipality of Almargen from late Neolithic, the area known its splendor with fenicos, when crossing at the road linking it with Tartessos Mainake.
Subsequently, in Roman times, she went through the road linking XI Antikaria with Acinipo, leaving the romanization numerous footprints in the territory.
The current name is of Arab origin, and means “the two meadows,” maintained this period remains of pottery, especially along rivers Almargen and Corbones.

GASTRONOMY
In Almargen, as in the rest of the region, the kitchen is determined, first, by the products of the land: meat (farm or hunting), vegetable oil, flour and wine, secondly stations years condition in eating habits, not only because of the weather, but because they add own seasonal dishes like mushrooms in the autumn or wild herbs (tagarninas, hinojos, asparagus trigueros and collejas), in the spring.

Typical dishes:
In its cuisine include:
Porra: presents the distinction of being thicker than the rest of the gazpachos. It is a mixture of simple gazpacho without water and salmorejo. Served with boiled eggs, ham and torreznos.
Pastry: Madeleines Easter.
And we also found: asparagus, game products, mushrooms and asparagus soup.

MONUMENTS
The heart of the village is its main square, where there is a source, and is very close the parish church of the Immaculate Conception, which was built in the sixteenth century and reformed in the late seventeenth century. The church has in the main facade and a beautiful home mannerist steeple crowned by a baroque. Its interior draw attention to the primitive armor Mudejar loop covering the nave and the presbytery. Archaeological sites are the Roman necropolis of the Sierra de Rebollo; tourist medicinal the spring of Casablanca and the caves of St. Peter and Casablanca.

LANDSCAPES
Almargen presents a landscape border between the SerranÃ­a de Ronda, Malaga flat countryside of north and the Seville and Cadiz. Landscape abrupt towards the mountainous CaÃ±ete for the Royal, where the road takes advantage of the narrow valley of the CaÃ±ada de la Saucedilla to climb up this population on the same doors of the Mountainous. A landscape that contrasts sharply with that of the agricultural plain that stretches around the village fields of olive trees, grain and sunflower. Beyond the plain landscape presents small hills of rounded forms, marking the roof of the municipality just over a hundred meters above from downtown (510), in the hills of Salguera (620), Galan (612), The Grana (649). The latter at the edges of the district.
The agricultural potential of the plain Almargen and its strategic location in an area turned into easy passage of men and goods have favored the settlement of these lands from very old, as has been shown by recent archaeological finds in connection with the construction of the road between Almargen and Olvera (Cadiz).