Be lodged in Seville 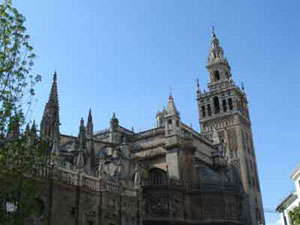 It situated in the southwest of the Peninsula, Seville extends on the two margins of the river Guadalquivir. Is capital of province and headquarters of the Parliament of the autonomous region of Andalusia. It has an extension of 14.000 kms2 and limits al south with Cadiz, al northeastern with Cordoba, al southeastern with Malaga, al western with Huelva and al northwest with Badajoz.
Its population, that surpasses the 700.000 in habitants, enjoys a warm, Mediterranean climate in the valley of the Guadalquivir and fresh in the zones of saw, maintaining an average temperature from among 11Âº and 14Âº in winter. Their spring is candy and pleasant and its summers are warm and long.
In the past, the port of Seville played an important role in the commerce between Spain and America. The 17th century was a period of splendor for Seville. Was cradle of painters as VelÃ¡zquez, Murillo and ValdÃ©s Loyal and of sculptors like MartÃ­nez Mountain. Also the city has contributed al birth of the myth of Mr. Juan through the literature.
Seville has been the headquarters of two important expositions: the Latin American Exposition of 1929 and the World’s Fair of 1992. This last one gave al world a new image of Seville, more dynamic and modern, contributing to the international projection of a city with an excellent one dinamizaciÃ³n socioeconomic and tourist.
In the world of the hotel business, the Expo 92 obliges to change the existing profile up till then, focused fundamentally toward the Holy Week and the Fair of April, doing that the offering with rapidity be duplicated by means of the creation of adequate installations to the demand increasingly more abundant of businessmen, executive, assistant to Congresses, conventions of businesses, seminars, trips of work and also of the new emerging tourism It organized that arises with the new times. Hotels, boarding houses, apartments, houses and flats of rent, restaurants and services in general form part of a powerful infrastructure that little by little has gone configuring the Seville present.
Seville counts currently with excellent hotels and boarding houses. Further down a relation is shown alphabetically of the better and more recommendable lodgings of the city.

Granada is a great city located in Andalusia in southern Spain. Historically, Granada has been a central place for great kingdoms in the last...

Houses for rent in Alicante during holy week

Holy week in Alicante begin in March. Then, it follows in April, mainly in the first week. You can find in Alicante a place for vacation. An...

Lodging during Holy Week of Seville

Seville is one of the main cities of Southern Spain where you can enjoy and admire the Holy Week. But as you wonâ€™t last in Seville as much of two...