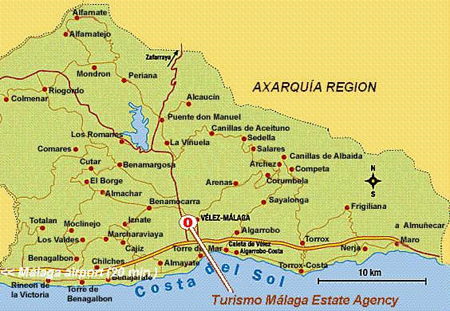 The AxarquÃ­a o AjarquÃ­a (pronounced both The AjarquÃ­a) is a region located in the easternmost part of the province of Malaga (Spain), on the border with the province of Granada. The district stretches along the coast as much of the interior, and its coastal municipalities make up the Costa del Sol East.
Its capital and largest city, is VÃ©lez and residents of the region are called axÃ¡rquicos.
Bordered: N with the District Alhama E with the county tropical coast, the S, on the Mediterranean Sea, the O Malaga, and NOT with the region of Nororma.
County Media: TV VTV-AxarquÃ­a, newspaper “The Voice of the AxarquÃ­a”, and newspaper “The AxarquÃ­a. 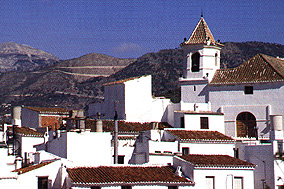 Etymology:
The Dictionary of the Spanish Royal Academy defines voice “jarquÃ­a” as a “territory or district site east of a big city and are dependent on it,” and said that comes from the Arabic Å¡arqÃ­yya, meaning east. In the province of Malaga is the region called La AjarquÃ­a, Arabic name of the mountains of Malaga, in the North and East of the capital. In many texts written his name appears AxarquÃ­a, with x – which is also correct, but which may induce the reader to give this letter to the sound ks that is the modern is assigned, and speak wrongly The AksarquÃ­a.
The Royal Academy, in its spelling of the Spanish Language, edition of 1999, explains: “In the Middle Ages, the x also represents the phoneme fricativo palatal of deaf dixo, from the sixteenth century to develop the phoneme fricativo ensure for deaf said. few remnants of this script are in place names such as Mexico, Oaxaca, Texas and its derivatives (Mexican Oaxaca, texano …), and some surnames as XimÃ©nez or MexÃ­a. Pronunciation of this x, in these and other words, it is fricative ensure deaf, ie sounds like j; therefore constitutes an error ortolÃ³gico articulate as ks. ”
You can add that among those other words referred to the Royal Academy, without naming, is undoubtedly AxarquÃ­a. Francisco boat in his book Knowing Malaga, cultural and tourist guide from the capital and its peoples, began its chapter Velez Malaga and its region with these words: “The AxarquÃ­a (or AjarquÃ­a) is located in a wide valley …” .

But this choice has to be understood in the sense that it is correct to write the word of two ways, but the pronunciation has to be both “AjarquÃ­a.”
We often hear certain broadcasters and television pronounce “AksarquÃ­a, MÃ©ksico, Oaksaca …”. But not everyone is so because at the beginning of 2001, when the occasion of the Zapatista march to the Mexican capital (read Mexico), was appointed the city of Oaxaca, was highly commendable professionalism of some television presenters, among whom it should be pointed out to those of Informational Telecinco, who always heard them say “Oajaca.”
The Maroma Peak is the highest point in the region, crossing rivers Velez, Torrox, Algarrobo, Iznate, Seco GÃ¼i, HiguerÃ³n, Chillar, AlmÃ¡char, de la Cueva, Benamargosa, SÃ¡bar, AlcaucÃ­n, Bermuza, Rubite, Maro , all in the South Basin Water, water is conducted through the ViÃ±uela reservoir. The natural park of Sierra Tejeda, Amijara and Alhama and Natural Place de Maro The cliffs are located in this region. 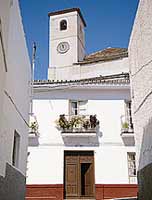